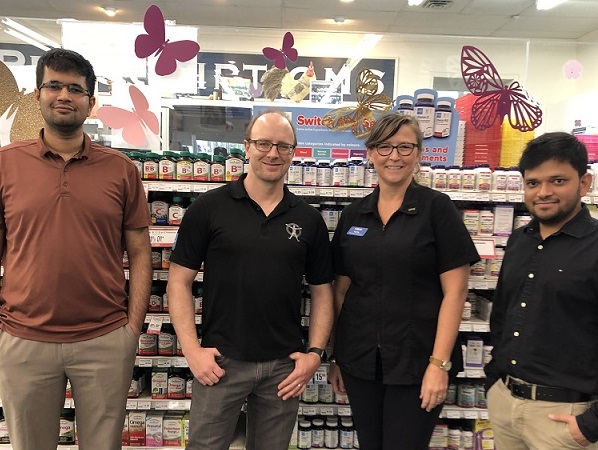 Recalling her experiences during the wildfires that affected northern Alberta earlier this summer, Kathy Parsons hopes it doesn’t happen again, but says it was an overall great experience. Kathy is a pharmacy technician at High Level Valu Drugs IDA. Along with the pharmacy manager Jan and pharmacists Drew and Keyur, Kathy made sure everyone displaced from their homes were still able to access their medications and pharmacy services when they needed it most.

As a High Level resident, Kathy recalls waking the morning of May 20, 2019 with the electricity gone. Evacuations were beginning. Kathy evacuated like many other High Level and surrounding residents but realized that her help was needed and messaged her boss to ask if he needed help. She returned to High Level as part of the team that included firefighters, police and other essential services. Not everyone in surrounding areas were evacuated at the same time and many patients were showing up at un-operational pharmacies requesting prescription medications. What she initially thought would be 3 days turned into 2 weeks. During that time Kathy and her pharmacy teammates were incidental in ensuring patients could still access their prescriptions and receive the information they needed.

During the wildfires, evacuation centers were set up in La Crete and Fort Vermillion which included make shift dispensaries. While the pharmacists manned the evacuation center dispensaries, Kathy and her boss remained at the pharmacy in High Level to facilitate logistics and the transfer of prescriptions and medications where needed. Every day when roads were open, Kathy or one of the pharmacists, would deliver medications from the pharmacy to the temporary dispensaries or directly to patients in surrounding areas such as Rainbow Lake or the Dene First Nation reserve at different check points.

In addition to running the pharmacy manually, combing through hardcopy files and handwriting labels with nothing but flashlights, Kathy was instrumental in fielding questions from concerned patients. During the evacuation period, Kathy would spend 14 hour days distributing medications and coordinating care by responding to the many phone calls the pharmacy received from both patients and healthcare professionals. Despite the long days and the looming threat of the fires, Kathy is glad she was able to help so many people.

Originally from Newfoundland, Kathy moved to High Level in 1997. She returned back to High Level after living in Edmonton for 10 years. Even under normal circumstances Kathy stays busy as the sole pharmacy technician at the pharmacy, responsible for supervising 3 full time pharmacy assistants and part time students. When Kathy first started in her current position in 2016, she brought her knowledge of the role of pharmacy technicians and was able to update the pharmacy’s processes to comply with standards and improve services. Kathy finds that as a pharmacy technician she offers a different perspective than the pharmacists which improves how the pharmacy runs. Kathy attributes her ability to work to full scope, in part, to her experiences over the years. If she was told she wasn’t allowed to do something she still wanted to know how to do it. Kathy continually likes to experience new things.

She hopes to pass the opportunity for new experiences onto the pharmacy assistants she supervises, and with Jan’s support, will be bringing her pharmacy assistants along with her to the 29th Annual Alberta Pharmacy Technician Conference in September.

Tip of the Week – Safe Use of Acetaminophen

Tip of the Week – Personnel in the Sterile Compounding Area

Transfers in a Community Pharmacy: Changing the Dialogue

Tip of the Week – Hand Hygiene